On 1 July 1989, months before the fall of the Berlin Wall, history was written: Music history, world history – but above all a love story.

This year the mother of all techno festivals celebrates her 30th birthday: Happy Birthday Loveparade!

On the 1st of July 2019, the day of anniversary of the mass phenomenon, Dr. Motte and nineties berlin celebrate the opening of their new temporary exhibition “30 Jahre Loveparade” (eng. „30 Years Of The Loveparade“).

In collaboration with the nineties berlin curator Michael Geithner, Dr. Motte gives personal insights into the extraordinary history of the Berlin parades. They show that the idea of uniting people in diversity under the umbrella of electronic music continues to have an effect in Berlin until today.

The special exhibition will be an expansion of the permanent exhibition until 31st January 2020. Tickets and more info: www.nineties.berlin

Hardly anyone has shaped and changed the electronic music scene as decisively as Dr. Motte. From 1989 to November 2005, the inventor and so called “Father of the Loveparade” was the face of the parade itself and a also figurehead of the international techno movement. His speeches to the closing rallies at the Victory Column (ger: Siegessäule) are legendary.

Dr. Motte registered the first Loveparade on 01.07.1989 as a political demonstration for “Peace, Joy, Pancakes”. “Peace” stood for disarmament, “joy” for music as a means of better international understanding and “pancakes” for a fair distribution of food.

Techno culture developed into the most important youth movement of the 90s, the Loveparade into its unofficial holiday. In just ten years, the number of participants rose from 150 to an amazing 1.5 million ravers who danced together peacefully on the Straße des 17. Juni for a better world.

In 2001, the Loveparade lost its status as a demonstration and had to postpone the date by one week. This resulted in enormous additional costs with a simultaneous collapse in visitor numbers.

Two more years, up to and including 2003, the parade could still be financed from its own reserves, sponsorship money and a financial injection from the city of Berlin. However, due to planning uncertainties on the part of the city, the sponsors then bailed out and the financing finally collapsed. The parades in 2004 and 2005 were cancelled.

Due to the threat of insolvency, the majority of the shareholders of Loveparade Berlin GmbH decided to sell the brand to a new owner in November 2005. After the parade the following year, Dr. Motte finally distanced himself publicly for reasons of content and idealism. 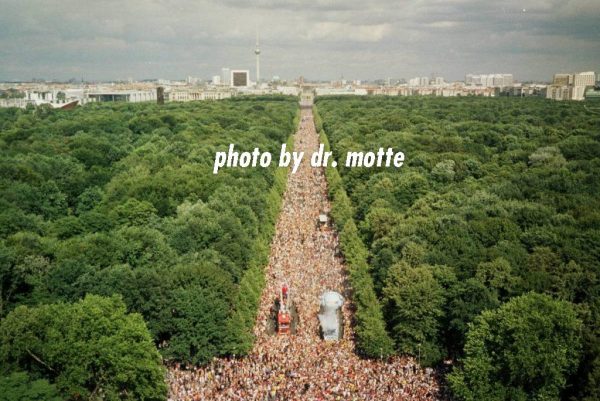