Next up on Ian Void’s revived imprint, Geushky Recordings we have a return visitor from Cologne 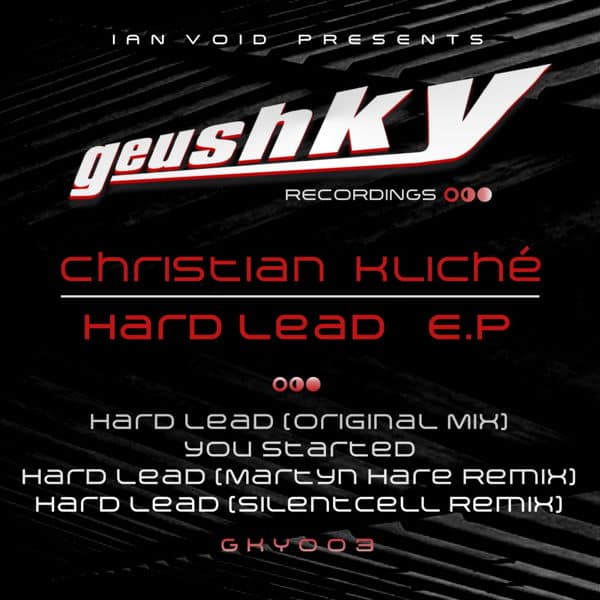 After the successful debut first release on the label, Christian Kliche returns with a beast of a track in the form of ‚Hard Lead‘

This uncompromising piece of dance floor techno has been sculpted from a menacing lead synth line that cascades over some seriously dark beats and builds up momentum into a searing, screaming banshee of a track. The dark crafted drums and atmosphere ensures that this is a track that is headed straight for the purveyors of heads down, strobe up techno.

‚You Started‘ takes no prisoners whatsoever. A shimmering unwavering synth stabs ever-onward, whilst the heavy barrage of percussive artillery pounds at its core. Effective and Destructive in equal measure.

Remix privileges fall into the hands of Martyn Hare. A veteran of the harder edge and more extreme realms of techno and a supreme sound-smith. Martyn’s seminal labels – Tremors and Emetic have been prolifically releasing techno from the heavier end of the spectrum for the last 15 years. Martyn has appeared on some of the most prominent labels of all time including Potential, Tronic and Recycled Loops to name just 3. A proper heavyweight.

His remix offers an electro-tinged, dark interpretation in a mangled moroder-esque techno landscape, a direct up-tempo escape into unnerving territory.

After His debut on the second Geushky EP, Silentcell returns on re-arrangement duties.

Taking a more aggressive approach with this belter of an adaptation of the original, a heavy duty, hi-octane remix further highlights this upcoming force from Italy.

Dr. Motte: We Need Your Help!