For many in Germany and England who worship techno music Gayle San is well known as an iconic DJ in the techno club scene who built a bridge between the London and the Frankfurt techno scene with here in-numerous gigs at top clubs such as Final Frontier and Omen and many others. 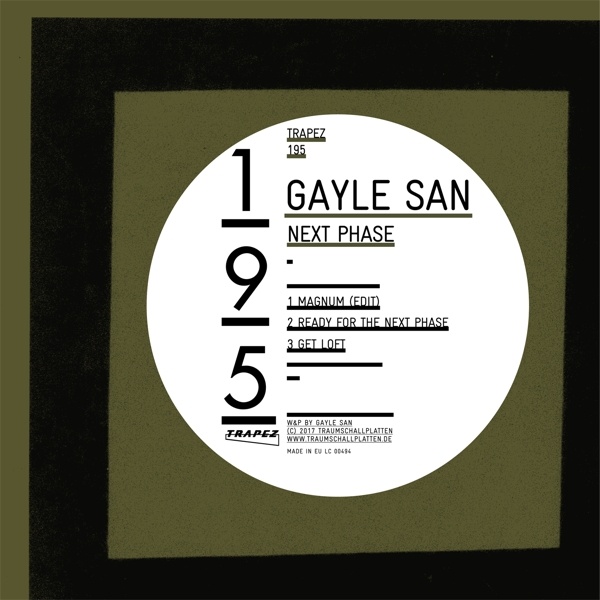 In 2000 she was voted number 6 of the most popular international DJs in Germany. Few know Gayle Sans career already began in the late 80s in her hometown Singapore. She started as a warmup DJ for Bands such as Kool & the Gang, Earth Wind & Fire and The Commodores in the Top Ten Club which was the club of that moment on the island. She left Singapore in 1988 to pursue her DJ career in the UK. For many she is the incarnation of a real techno DJ and a real force behind the decks giving credit to the fact that she was also one of the few DJs that djed with 3 decks!

So here come three brand new trax by Gayle San on Trapez which rock the house! The EP kicks off with with the track „Magnum“ that thrills through a fine blend of elements taken from techno, house and dub forming a coherent stimulating flow of convulsive beats! A track that won’t let you down in a techno set.

„Ready For The Next Phase“ is equally as powerful but deeper in intention. Chords and tons of FX let it glide virtually through the roof. Time passes here in a flash and you might want to go for a rewind!

„Get Loft“ works with less acceleration but instead is heavier on the beat side and includes house samples and heavy FX treatment. Also check out the break down here which makes it all worth while!