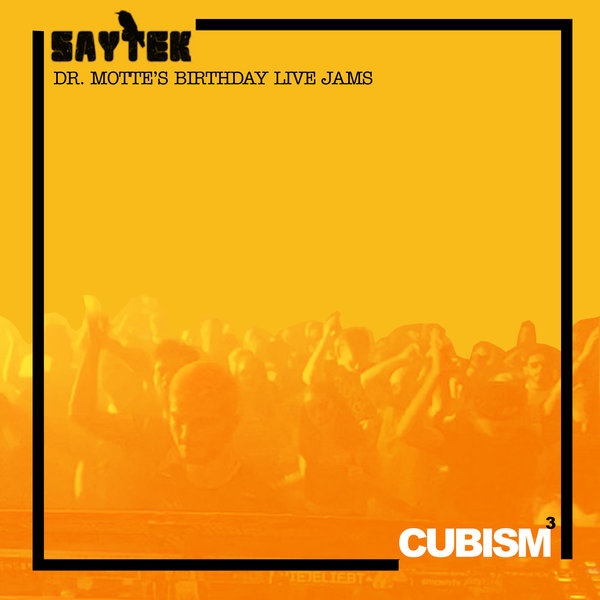 Saytek’s Infinity Machine EP set Cubism alight back in April of this year as he embarked on the biggest summer of his career ahead of the release of his critically acclaimed ‘Improvisations (Live)’ album on Carl Cox and Christopher Coe’s Awesome Soundwave label.

We are pleased to present on Cubism a very special new 8 track release from Saytek in collaboration with Awesome Soundwave who will be releasing the whole set as part of their ‘live series’.

The individual tracks making up the set will be available exclusively on Cubism and were recorded for the legendary Berlin Loveparade founder, Dr Motte’s birthday at Suicide Circus Berlin in July.

Saytek performed live in the main room that night for him and produced the tracks specially for the amazing party!

Saytek has since been performing these tracks live in his shows including at Awakenings ADE, Creamfields, Carl Cox invited Fabrik Madrid and numerous dark basements in Berlin to devastating effect.

UK artist Saytek (aka Joseph Keevill) has gathered some serious momentum over the last few years and has become one of the electronic music scene’s most in-demand live acts. From shows in Ibiza at The Zoo Project, The Terrace of Space (including their closing party) and regular shows at fabric London to being fully embraced by Berlin’s underground scene performing regularly at Tresor, Golden Gate, Salon – Zur wilder Renate, Chalet, Sisyphos, Kosmonaut, Ipse and more. Saytek has a relentless tour schedule with gigs at some of the best clubs and festivals in Canada, Croatia, France, The Czech Republic, Italy, Belgium, Poland, Spain, Netherlands, Finland to name but a few.

He has garnered acclaim the world over with his improvised live shows that see him using a myriad of kit. Saytek is master of musical technology with a unique energy and ear for melody and knows exactly how to make each piece of studio kit dance to his visionary ideas. He writes produces and performs everything live, using Elektron Analog 4 & Analog Rtym, Ableton, Korg: Monotron Delay Kaos Pad & Volca: Bass, Sample, Keys. Novation Impulse 25, Native Instruments Maschine + lots more.

Saytek’s music output is prolific and includes EPs and live albums on his own Cubism label, along with 12″ and digital releases on labels such as Liebe*Detail, Soma, Bedrock, My Favorite Robot Records, Wiggle, Monique Musique, fabric (London Club), Golden Gate Club Records, My Favourite Freaks, KMS and many more. His work has graced the playlist of the dj elite including Carl Cox, Laurent Garnier, Steve Lawler and Marcell Detman, among many. Saytek was nominated for Best Live Act by DJ Mag for their 2013 Awards; while Mixmag awarded Album Of The Month the same year.