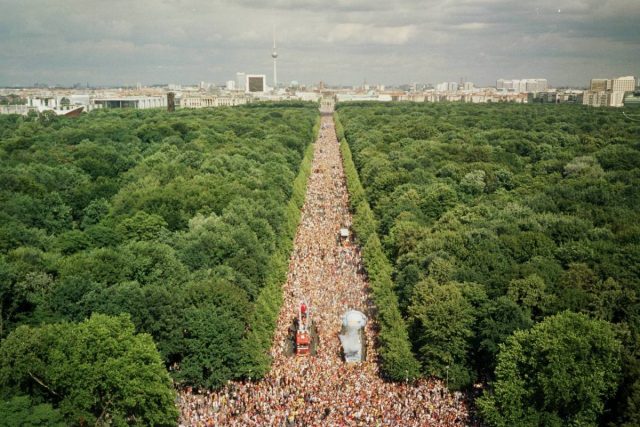 Dr. Motte and nineties berlin are looking for videos and photos of the Berlin Loveparades

nineties berlin, the multimedia exhibition about the 90s in Berlin, opens the new special exhibition “Dr. Mottes Loveparade” on July 1st, 2019. On the occasion of the 30th anniversary of the mass phenomenon, the techno pioneer, inventor and father of the Loveparade himself will provide personal insights into the extraordinary history of the Berlin parades between 1989 and 2003, in wich he was significantly involved in their realization and implementation. The special exhibition will be on view until 31 January 2020 as part of the permanent exhibition nineties berlin.

In the summer of 1989, when 150 people danced together for a better world on Kurfürstendamm to the basses of electronic music under the motto “Friede, Freude, Eierkuchen” (Peace, Joy, Pancakes), they could not have imagined that only ten years later 1.5 million people would follow them. The special exhibition shows how the original demonstration of a youth culture once hidden underground developed within a few years into a global holiday for an entire generation – in the middle of Berlin, a city that had just grown together.

The curators Michael Geithner and Dr. Motte are looking for videos and photos of participants of the Loveparade from 1989 to 2003 – whether analog or digital, whether as negatives or on video cassette. nineties berlin is looking forward to the support of the “Generation Techno” and its personal testimonies as well as for memorabilia and promotional items from the Loveparade (1989-2003) on loan for a special installation in the exhibition space.

In addition to being named in the special exhibition lenders will receive their videos and photos in digitally prepared form as a thank-you and will be invited to the vernissage on 1 July 2019.

If you would like to support this project Michael Geithner is looking forward to receive your e-mail: michael.geithner@nineties.berlin

If possible, please indicate the year in which the recordings were made, whether you own the rights to them and whether they have already been digitised. A photo of the memorabilia in the e-mail would also be very helpful.